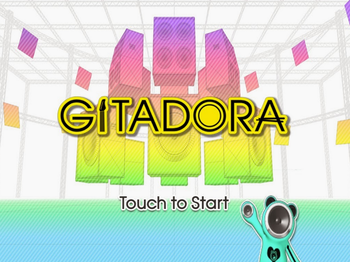 In 1999, Konami, who had cemented themselves as masters of the arcade Rhythm Game with beatmania and the recently released Popn Music and DanceDanceRevolution, decided to expand their horizons into games that didn't just involve hip-hop and dance. It began with GuitarFreaks; a game that involved playing a relatively simplified rendition of a guitar by holding down one or more of the three buttons on its neck (colored in red, green, and blue) and using a switch at the bottom to "strum" it. Konami knew what they were doing so much, that with the release of GuitarFreaks 2nd Mix later that summer, they also introduced a companion series known as DrumMania (which was Exactly What It Says on the Tin, having to use a five-piece set of drum pads attached to the cabinet as instructed). The two games could also be linked for multiplayer in an arrangement they called "session play".