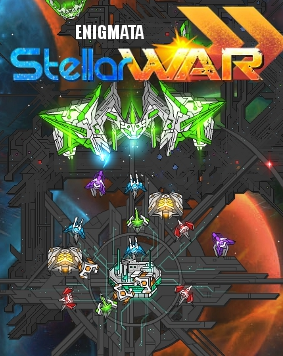 The game is faithful to its roots, with a fairly standard plot and setup. It's 20 Minutes into the Future and the Evil Overlord Genu is threatening galactic peace. You play a space-faring AFGNCAAP on a mission to stop him, aided by the shopkeeper and Text messenger with an internet connection Niko.

You control one of a variety of very spiky-looking fighter craft, and use simple keyboard controls and various Energy Weapons and missiles to shoot at other, equally spiky enemies. Said enemies drop various power ups and cash bonuses with which to buy upgrades between levels. Said upgrades vary wildly, from simple stat bonuses to having unique effects like slowly generating money. You also have a handful of special abilities at your disposal that draw off an energy meter. At the end of each level waits a Boss Fight against increasingly large and powerful warships. You can replay previous levels to obtain more money.

The sequel spices things up by allowing you to aim your ship and weapons anywhere on screen with the mouse whilst still flying vertically through the level, adds a load of new upgrades and skills with heavily diversified effects, and adds an oppressively dark color scheme broken up by colored lights. Oh, and a Mini-Game where you collect a bunch of orbs.

Enigmata, its sequel, and its spin off provide examples of: