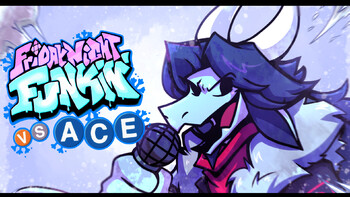 Hope y'all are ready for some chill D&B vibes.
Advertisement:

is a Friday Night Funkin' Game Mod created by Kamex

, featuring his own avatar Ace. In this mod, Boyfriend and Girlfriend are waiting for a bus, and decide to pass the time by rapping with an ice dragon. Chill beats ensue.

from their respective playable mods, who each have their own humorous dialogue for the week.

On February 19th 2022, the mod was updated, adding a second week to the main story and adding 3 new freeplay songs.

See also, the (sort-of) sequel to this mod, the Vs. RetroSpecter mod.

Week A provides examples of: