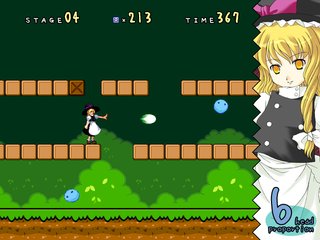 Marisa ended up getting hit by the lower Fuzzy.
Advertisement:

Super Marisa Land (or simply MarisaLa) is a 2005 Platform Game by Twilight Frontier, creators of Mega Mari and co-creators of Touhou Suimusou ~ Immaterial and Missing Power. Loosely based on Super Mario Bros., you play as Marisa, who goes on a search for golden mushrooms. That's... pretty much all there is to the story. In v1.10 and higher, you can also play as Alice, who has even less of a plot.

The game uses a system called "head proportions", by which Marisa's power can be measured. Collecting brown mushrooms increases them by one, to a maximum of four; red mushrooms, on the other hand, double them, for a maximum of eight. Alice, on the other hand, cannot progress beyond 2x head proportion. She gets the ability to throw Marisa dolls as projectile weapons to make up for this.

The official website for the game, and where the latest patch for the full game, can be found here

See also New Super Marisa Land, a sequel to Super Marisa Land. Not to be confused with Super Marisa World, a Touhou-meets-Super Mario World by Double Cluster. 13 years later after the release of this game, Twilight Frontier went on to develop a remake Super Marisa Land, entitled MarisaLand Legacy, with updated visuals on par with its sequel, new co-op multiplayer features, and a set of extra "Hardmode" levels. An English-language version of the game can be purchased from DLsite's English webpage here