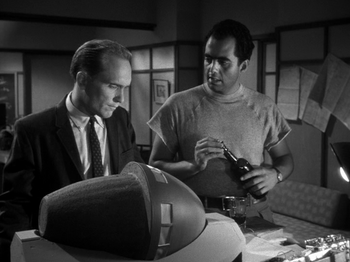 Ballard checks out Renaldo's anti-gravity device.
The Control Voice: In the troubled places of the world, the Devil's Hunter finds rare game. For man-made savagery is only the instrument for a secret terror stirring from its dark place of ambush...

After four soldiers are shot with bullets made of meteorites, an alien force compels them to work on a mysterious project.

The Control Voice: Man looks up at the stars, and dreams his futile dreams. Child of the universe, his toys are ignorance, his games, fantasy. Not even master of his own fate, it is the Devil's Puppeteer who stretches his fingers to answer the question: What will happen next?

The Control Voice: The Earth, tumbling grain of sand in the darkness of unending space, plays host to a strange and awful guest, unsought, uninvited, possessor of fearsome power, purveyor of dark deed, a relentless traveler on the road to its mysterious goal... 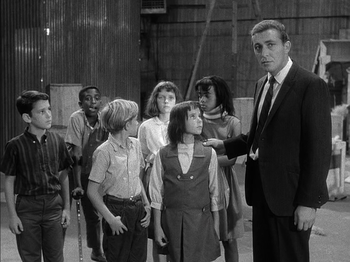 Lt. Minns with the disabled children.

Ballard learns that the alien project involves not only the soldiers, but a group of disabled children.

The Control Voice: The Inheritors are on their way. In a universe of billions of stars, there are places of love and happiness. On this Earth, in this spot, magic settled for a moment. Wonder touched a few lives, and a few odd pieces fell smoothly into the jigsaw of Creation.

"This is troping power like nothing you've ever seen!"