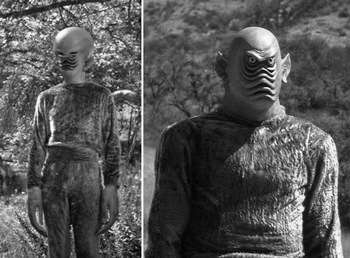 Alien!Ikar and one of his enforcers. 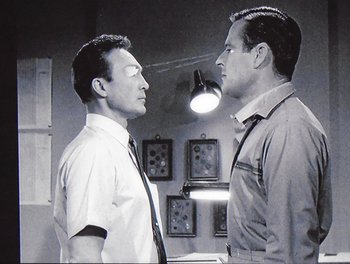 Human!Ikar takes Eric's emotions for a test drive.
The Control Voice: There is no limit to the extension of the curious mind. It reaches to the end of the imagination, then beyond into the mysteries of dreams, hoping always to convert even the dreams into reality, for the greater well-being of all mankind…

An inventor exchanges his emotions for intelligence to an alien in order to create a lethal weapon.

The Control Voice: The curious mind cannot be chained. It is a free mind, endlessly searching for the greater freedom that must eventually make every living being joyfully complete within himself, therefore at peace with himself and his neighbors.

Troper of the Purple Twilight: