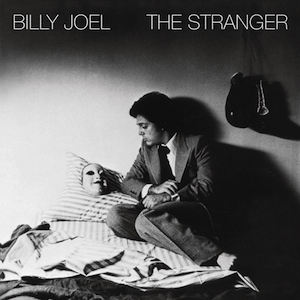 And if that's what you have in mind
Yeah, if that's what you're all about
Good luck moving up, 'cause I'm movin' out!
Come out, Virginia, don't let me wait
You Catholic girls start much too late
Oh, but sooner or later, it comes down to fate
I might as well be the one

Well, they showed you a statue, told you to pray
They built you a temple and locked you away
Oh, but they never told you the price that you'd pay
For things that you might have done
—"Only the Good Die Young"
Advertisement:

The Stranger is the fifth studio album released by American singer/songwriter/pianist Billy Joel. It was released through Columbia Records on September 29, 1977.

After hitting it big with his second album, 1973's Piano Man, and its memorable Title Track, Billy struggled through the next two albums. While both went Platinum in the United States, they only yielded one Top-40 hit between them.

While producing his most recent album, Turnstiles, he formed a new backing band. He wanted the new album to feature said backing band. But he found it difficult to find a producer he felt could get him back to success.

He ultimately turned to producer Phil Ramone. The resulting album took only three weeks to produce, and Billy described the recording process as "a blast". And it shows, as the new album produced four hits; any one of which could be a signature song for him if he didn't already have "Piano Man".

The album was his highest peak yet on the Billboard 200 album chart, hitting #2, and was ultimately certified Diamond by the RIAA. It would hit #4 on the Billboard Year-End chart for 1978, and #18 for 1979.

"Just the Way You Are" would be his highest-charting single yet, hitting #3 on the Billboard Hot 100, and being his first to top the Billboard Adult Contemporary chart. His other three singles—"Movin' Out (Anthony's Song)", "Only the Good Die Young", and "She's Always a Woman"—would also be Top-40 hits. The Title Track, while it didn't chart in the U.S., would become big in Japan, hitting #2 there, and #8 in New Zealand.

"Just the Way You Are" would also win the Grammy Awards for Record and Song of the Year in 1978, giving Billy two of the jewels in that year's Triple Crown.

"She tropes like a thief, but she's always a woman to me"