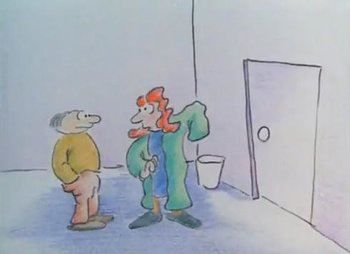 Special Delivery is a 1978 animated short film written and directed by Eunice Macaulay and John Weldon. It was produced by the National Film Board of Canada.

On a cold, snowbound winter day, Ralph Phelps ignores his wife Alice's nagging to clean the snow all over his front porch. This decision bites Ralph in the butt shortly thereafter, when the mailman slips on their steps, breaks his neck, and dies. Ralph, panicking over both the legal and financial difficulties he could face from having a mailman suffer a fatal fall on his porch, elects to hide the body.