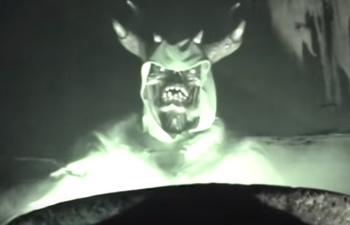 A nightmare is a wish your fear makes.
"What chilling words?
Like shriek or killer,
Can spark the mind to start a thriller?
Add some more sparks like dagger, blood, and gory,
And then, a mystery story."
— Dreamfinder playing an Ominous Pipe Organ (which is actually a huge typewriter/computer) in the Tales of Terror portion of the original Journey into Imagination.
Advertisement:

Though Disney theme parks are perceived as places of dreams come true, a little imagination can also expand your greatest fears into an overwhelming nightmare.

Rides with their own pages: