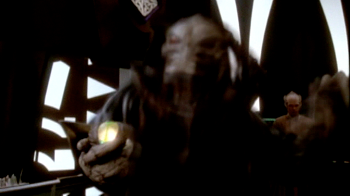 ISN is on in C&C and Sheridan is planted in front of the screen winding himself up...or gathering intelligence. Whatever. He notes that Earth is setting up for a "rescue mission", but it won't be for a while. Just then a signal come in from Franklin. He says the board meeting is on, confirming that he has met the Resistance and the meeting is a go.

After signing off, Franklin and Number One have a short talk about the situation. Earth Force is closing in and some of the others are getting desperate. To drive the point home, Marcus rushes in with news: the Resistance has bombed the Red Planet hotel, taking out an Earth security force and ten civilians. Number One rushes off.

On Babylon 5, Delenn is being informed by a Minbari named Forell of attacks in Mibari space against some of their allied races. The alliances were forged by the Religious Caste, but without the Grey Council the Warrior Caste is no longer defending them. Delenn decides to investigate personally.

In space, a fleet of dart-shaped ships destroy another ship.

Delenn comes up to C&C to talk to Sheridan about the attacks. Sheridan says there have been other attacks outside pak'ma'ra space, someone is either trying to take advantage of the aftermath of the Shadow War or looking to stir up trouble. Since one of the races affected is under Minbari protection, she is going out. Sheridan balks, asking if she couldn't send Lennier, it could be dangerous. Delenn gently puts him in his place, and he assents.

Number One is far more forceful in doing the same to one of her own, Phillipe, as she rakes him over the coals for the bombing, and especially that he did it without checking with her first. She reminds him that Mars is her territory and she's the one who will be held responsible for everything the Resistance does there.

Number One: I don't care what you do back home, but here you answer to me. And you don't do anything, you don't breathe, you don't move, and you don't blow things up unless you check with me first! Clear?
Phillipe: (nods) Tell me, is this how you treat all your former lovers?
Number One: As a matter of fact, yes!

She storms past Franklin and Marcus, who note she looks upset.

Back on station, Sheridan is still watching ISN when he suddenly gets an idea. Ivanova is asleep when her door chime goes off, and she drags herself out of bed and answers the door, and an enthusiastic Sheridan charges in going on about how he has it, and they can play their own games. He's about to drag her off when she points out she's still in a nightgown and robe. Sheridan didn't notice.

Ivanova gives him a hard stare then goes into her room, muttering under her breath. A short time later he brings her to the War Room. He reminds her about how she was giving the announcements about refugee sanctuaries and Shadow and Vorlon movements. She hated it, but he thought she was great at it. He wants to do something similar, the Voice of the Resistance, giving the real news about the war, providing intelligence for Resistance cells, encouraging enemy officers to defect, and Ivanova gets the sneaking suspicion she's being volunteered for this. Sheridan accepts her "offer".

Sheridan: Now get some sleep, and we'll discuss this in the morning. (walks off)
Ivanova: If he weren't my commanding officer, I swear I'd shoot him dead.

In hyperspace, Delenn leads a flotilla of White Stars to the area of the attacks, and she discusses the situation on Minbar with Forell. Without the Grey Council the castes are beginning to fracture, and the Warrior Caste seems to be trying to form its own ruling body, and forcing the other castes out of certain areas. At least, that is the rumor. He walks off and Delenn muses on what he said.

On Mars, Franklin begins addressing the assembled Resistance leaders, and bring several messages from Sheridan. He conveys the outrage they felt over the bombings ordered by Clark, telling them it was one of the reasons they seceded themselves. The Marsies are a bit skeptical. Sheridan helped put down the food riots after the Minbari War, and they still remember that. Marcus assures them Sheridan is willing to set aside all differences and work together. He is putting together a coalition to move against Clark, the person not the actual Earth government. There is a minor uprising at that, but it is quickly quelled, reasoning that trying to overthrow Earth will only prove ISN right. And to that end, Sheridan wants the bombing of civilian targets stopped. It drives people away when they should be trying to bring them around.

Number One asks where Babylon 5 has been all this time, and Marcus explains a little about the Shadow War, and points out that the incident with Captain Jack proves that they are at least partially responsible for what's going on now. Franklin then asks that they carry out any instruction from Babylon 5 without question. And he has one more message: after everything is done, Mars will finally be recognized as an independent state. This is met with scoffs of disbelief, but Franklin presses on.

Franklin: This is what you have been fighting and dying for and you are no closer to your goal now than before. Clark's forces will keep closing in on you whether you sign up with us or not, and in six months the Resistance will be dead! Now we're offering you a chance. We'll give you support, and a real target, which is a hell of a lot better than bombing civilian targets on your way to the gallows!

He stares at them, daring anyone to challenge him. No one does.

As the White Stars arrive at the target location, Lennier picks up a Distress Signal from a pak'ma'ra ship. They are under attack from unidentified forces. Then the signal is lost. As the White Stars approach the aggressors turn toward them. Delenn orders a channel opened, and after an initial message in an alien language a message comes through in Minbari. Delenn realizes the only way that could be possible is if they already had had contact with one of their people. Forell pulls a gun on her. He doesn't want to her doing anything until she has a chance to speak to them. He has them follows the aliens, called the Drakh, somewhere else.

On Mars, Number One finds Franklin and Marcus and tells them they have their support, for now, and hers. Even if they are liars; Sheridan couldn't have known about the bombings, and so couldn't have sent a message, but it helped her out so she isn't complaining too much. Marcus notes that she didn't thank him at all, and begins teasing Stephen about her liking him. Moments later, she comes back and offers dinner since their hotel is now rubble. Oh, and Marcus has guard duty. She walks off again and Marcus starts gloating that he was right, but gives Stephen a little advice.

Marcus: Touch passion when it comes your way, Stephen. It's rare enough as it is. Don't walk away when it calls you by name.

The White Stars arrive at their destination, where a much larger ship is waiting. It launches a small pod craft to rendezvous with the White Star and a dark, hooded figure with a skull-like face comes aboard. It introduces itself as an emissary for the Drakh. Forell begins explaining that everything he said earlier was true. The Warrior Caste has formed its own council and without the Grey Council there is no one else to hold them in check. Forell's family was in one city where the warriors drove them out, forcing them to walk to the next city, while many died of exposure. Delenn apologizes for not knowing, but Forell insists things are returning to the days before Valen, and believes that if they have allies the Warrior Caste will hold back. All the Drakh are asking for are several unoccupied worlds in their space. They only want a place of their own because, Lennier realizes, they no longer have one. Delenn asks if their homeworld has a name, but only gets "Home". Forell urges her to take their offer and she says she will consider it. As the emissary leaves, Forell thanks her. "You will not regret this, Delenn." The emissary hears and recognizes her name and as it leaves, Delenn orders the fleet to prepare for battle.

Forell protests, but Delenn explains that the Drakh are from Z'ha'Dum, servants of the Shadows who now seek to fill the void their masters left and take revenge on those who drove the Shadows off. As the shuttle leaves, the warships turn and begin powering their weapons. They're boxed in, but the Drakh haven't fired because they are too close to their mothership to attack without damaging it. Delenn decides they should escape by flying along the mothership's hull until they have enough momentum to escape. She makes it look like they're leaving while Lennier programs the flight into the White Star, and just as the Drakh are ready to fire, they execute. The ships engage in a high-speed chase along the hull until the White Stars gain enough speed to jump into hyperspace. As they race for the jump points, several of them take hits, one is destroyed and Forell is fatally injured. With his dying breath, he apologizes for bringing her here, but she apologizes for staying away from home for so long.

She asks for a status report, and Lennier reports they are mostly operable. He's about to plot a course for Babylon 5 but Delenn countermands him.

Delenn: They destroyed ships from league worlds, murdered their crews, destroyed White Star 16, and now...they will pay the price.

As the Drakh regroup, the White Stars jump back in, guns blazing. They quickly massacre the smaller gunships, but the mothership begins making a run for it. Delenn orders them to race out in front of it then they turn and fire their main gun right down its spine, blowing it wide open.

The fleet then returns to Babylon 5, as Delenn considers what she needs to do next.

After getting home, she comes into the War Room, which has been completely changed. Sheridan has information about more Drakh ships in different areas, but Delenn has more bad news. She tells him the situation on Minbar is deteriorating and she needs to go there. It will take some time, and she's not sure when she will be back. She also thinks the time apart will be good for them. She tells him he keeps trying to pretend things haven't changed, which is why he's pouring his energy into the Earth problem. He's been holding back the parts of himself that have changed, but Delenn isn't fooled. He needs to be dangerous and she thinks he would be more comfortable doing that without her around. For her part, she needs to go and deal with the the problems on Minbar before they tear her people apart.

Sheridan quietly asks for dinner, and she agrees.

On Mars, another couple is through with dinner and past the polite stage, as Marcus sits by himself playing with his pike.