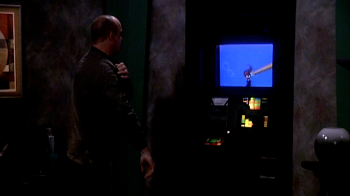 Pay close attention, Michael, because this is more like your life than you realize.
If you're gonna wait for the universe to start making sense, you have a long wait ahead of you.
-Sheridan
Garibaldi is doing business in the Zocalo, while Wade and some associaties watch and discuss using him. They have an assignment for him, one that could be dangerous. But if he gets killed, they just got the wrong guy.

Sheridan is in his darkened office when Zack come in. He's got something he needs done, something he's been putting off for a while. He neeeds Zack to go and get Garibaldi's security ID, link and weapon. Zack has been avoiding it too, but still thinks Garibaldi will come around. And the way he suddenly resigned just doesn't make sense, but Sheridan still wants it seen to. He doesn't like who Garibaldi associates with these days.

Franklin is back on station and comes to check out the Voice of the Resistance setup. He's impressed, but unless they can find a way to boost their signal, it's all just a stage. Franklin offhandedly suggests Epsilon III, the Great Machine has more than enough power. Ivanova suddenly has the idea of using Epsilon III, which is, after all, the obvious, most logical choice that only a fool would not think of.

Franklin: Well, I wouldn't have thought of it, that's for sure.
Ivavnova: Oh, you're far too modest Stephen.
Franklin: No, no, no, that's why you get paid big bucks, after all.
Ivanova: Yep, that's my job.

Ivanova heads off to look into her brilliant idea, leaving Franklin behind.

Franklin: You know I like her. Scares the hell out of me sometimes, but I do like her. Just don't tell her that.

Zack makes his way to Garibaldi's "office". He's having a good day, but Zack brings up Sheridan, which immediately throws a wet towel on Garibaldi's mood. Zack relays the order to give up his credentials, and Garibaldi is surprisingly obliging, except when it comes to the PPG. Zack insists he turn it over, it's military issue. Garibaldi can get a personal weapon, but Sheridan wants the gun he was issued. And the backup. It's in the regs, and Sheridan would have only sent someone else if it wasn't Zack. Garibaldi says he would have been able to live with that a lot better and walks off.

Later, Garibaldi is watching cartoons as he prepares dinner when Wade comes calling. Wade has a proposition, one he wanted to discuss privately. He wants to hire Garibaldi as a bodyguard and expediter. Wade has a contact coming, and wants Garibaldi to get them through Security without any trouble.

Ivanova lands on Epsilon III, but while going to see Draal, she runs into...Zathras? Yes it is Zathras, but they have never met. He is Zathras, not Zathras. There are ten, well, nine now, in family Zathras, so Zathras is not Zathras, Zathras is Zathras. Now that confusions are made clear, Zathras happy to help with problems, people always coming with problems. People never come to see Zathras, never come to talk to Zathras, but Zathras is used to it, so Zathras does not mind. He has come to like it. And Zathras happy to help. This way! Zathras fix!

Ivanova: Nine of them! Oy!

Garibaldi leads Wade to the docking bay, via the opposite direction, using his backup security ID to get around his old people. Wade explains that there's been a change: Wade's employer couldn't make it, so he sent his wife in his stead. Wade points her out, and Garibaldi finds himself back on Mars facing this very woman right before she broke off their relationship. Lise Hampton-Edgars. A woman who had in the years since gotten married to someone else.

In his quarters, Garibaldi grills Lise about what happened. Sometime in the last three years she's gotten divorced and remarried and never told him a thing about it? She explains that Franz was having an affair and filed for divorce before she could. Since the judges are all Earth appointees, they always favor Earth-born over Marsies, so Lise got nothing. Now Franz is remarried and has their daughter, who will never even know Lise exists. She was confused and didn't want to intrude on his life here, since he finally seemed to be happy with it. Six months ago, she met William Edgars, the multi-billionare. Garibaldi doesn't want to talk about it anymore, he's just going to do the job, and then pretend they never saw each other.

Garibaldi: And you know what? I don't need to drink anymore to do that.
Lise: I'm glad Michael.

Wade comes in just then to take them to the meeting point.

Londo is in Sheridan's office when G'Kar comes in. Neither of them are happy about it, but Sheridan wants them both for this. He talks about the situation following the war, and how some are trying to use it to their advantage, raiders, worlds looking to expand their influence, Drakh. Londo recognizes the name, saying they were a legend on his world. They were ruthless, savage, but intelligent. No one has seen them for centuries, but they're back now, and there's no one controlling them or any of the other Shadow allies, all of whom still have their masters' technology. Sheridan wants to give the Rangers a new mission, and station the White Stars along their borders to keep watch for these rogues. Their purpose would be to maintain the peace, and protect civilians, not to engage in military engagements.

G'kar points out that this could be seen as Sheridan's attempt to build his own empire, but he assures them the Rangers will only go where invited. Londo actually agrees with G'Kar, warning Sheridan that he's playing a dangerous game. But that's why he wanted the Narns and the Centauri in on this, thinking that if these two implacable enemies could agreed on this, it might bring the other races in line. Dithering will only lead to more deaths, and that blood will be on their hands.

Sheridan: Is that what you want? Is it?

Zack comes into his office and requests an update. Several minor incidents, and an unauthorized entry. A passenger from the Mothak'Cha is unaccounted for. When Zack probes further he finds that the customs bay was accessed by Security Chief Michael Garibaldi. A query confirms that Garibaldi does in fact have more than one security ID. Angry and feeling betrayed, Zack cancels all of Garibaldi's credentials.

At a downbelow dive, Garibaldi's party waits for their contact. A nervous-looking man approaches with an item locked in an indestructible case that can only be opened with the right molecular code. That means serious possible contamination, which sets alarm bells off in Garibaldi's head. Lise assures him her husband is a humanitarian, and this information for an illness that appears to be plaguing telepaths. They're keeping it under wraps to keep a panic from starting, and to keep it out of the wrong hands. It's very complex so they had to turn to offworld help, and now they'r trying to get it back home.

Before long, two guys come in, and start shooting. Garibaldi leads Lise and Wade out, but when he attempts to open another passage, he finds his card doesn't work anymore. Now he has to get creative. He blasts open an air vent, and after they get into it, he waits for their pursuers. One of them pokes his head up, but does nothing, then goes back down. Garibaldi realizes he was just telepatically scanned, and scrambles to get the others out of harm's way.

He reaches them just as shots start to come up from below. After they get in the clear, he tells them they're going to make for Docking Bay 3. With the two of them repeating that, he leads them in the opposite direction. They emerge in a Red Sector corridor, where Garibaldi says he told them that so their pursuers, who are telepaths, would pick it up and be mislead. He grabs a security guard and has him tell Zack that the shooters from Downbelow are heading to Bay 3, then sends Lise and Wade off. Lise doesn't want to leave him, but Garibaldi says she'll be leaveing wither way.

In Bay 3, the telepaths are poking around when Zack ambushes them. He demands to know what they're doing, but they just crack cyanide capsules and drop dead. Garibaldi arrives seconds later, disappointed to find them dead rather than arrested.

Ivanova arrives back with news that everything's arranged. She's about to tell the captain, but Franklin says she might want to wait.

Sheridan is currently demanding to know of Garibaldi just what the hell happened out there, and why are there three dead bodies now? Garibaldi protests that he doesn't who they were, or who the contact was, but he has no way to convince Sheridan he's not lying either. Sheridan accuses him of jepeordizing the station, and Garibaldi rounds on him for taking his gun and ID. He's about to leave since there are no charges (trespassing, violating station security, unauthorized use of an identicard), no serious charges that is, Garibaldi tells Sheridan to fine him and starts to leave. Before he does, Sheridan warns him that if anything like this ever happens again, he will be shut down. Garibaldi looks unimpressed and walks off.

That night, Garibaldi comes back to his quarters to find a message from Lise on his terminal. Rather than rehash old wounds, he just deletes it. Later, there's another message, this time from William Edgars himself. Edgars thanks him for getting Lise out safely, and was impressed by his skill and resourcefulness. he offers Garibaldi a position in his organization, and Garibaldi says he's interested.

Powered by Epsilon III, the signal can finally go out.

''This is Commander Susan Ivanova of Babylon 5. And this is the first official broadcast of the new Voice of the Resistance. We're sending this signal out to every ship that wants to hear the truth, to our fallen comrades and freedom fighters on Mars and Proxima III, and to Earth, which despite what you may have heard is still our home and still the one dream that we are as loyal to now as we ever have been. Over the last three years, ever since President Clark took over after arranging the assassination of President Santiago, you have been hearing nothing but misinformation, propoganda, and outright lies. Now we're going to tell you the truth, and we're goign to keep telling it until they shut us down or until President Clark steps down and returns Earth to the hands of its people. You can kill us, you can bomb our colonies, destroy our ships, murder innocent civilians, but you cannot kill the truth. And the truth is back in business.

Tropes used in Conflicts of Interest: