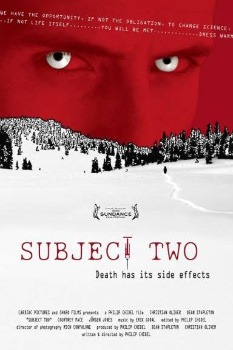 Subject Two is a 2006 Sci-Horror film in the vein of Frankenstein that explores the consequences and morality of bringing the dead back to life.

Adam Schmidt (Christian Oliver) is a willful young medical student who is invited to take part in groundbreaking research being led by Dr. Franklin Vick (Dean Stapleton). Curious and fed up with the rigidity of medical ethics, Adam accepts and leaves his school for snowcapped mountains, where Dr. Vick has a cabin isolated from the rest of society. After having an amiable chat with a local delivery girl named Kate (Courtney Mace), Adam and the doctor have a wary first encounter, but Vick manages to win the younger man over by calling him out on his curiosity and hinting at the potential of his work. Adam agrees to become Dr. Vick’s new assistant…

And then Dr. Vick kills him so the research can really begin.

Adam is subsequently revived and killed repeatedly throughout the film for the sake of the experiment. But as time passes, complications arise that require drastic action.