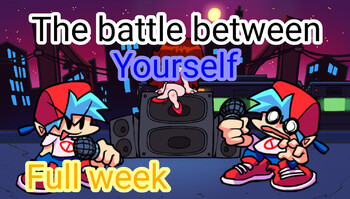 "I came here to replace you"
"I could easily defeat you whenever I want"
—The Impostor Boyfriend in "Replacement" during The Rematch Between Yourself.
Advertisement:

The Impostor Boyfriend Saga is a series of Game Mods created (and mostly composed) by DavidPootis for Friday Night Funkin', made using the Kade Engine. The mods star a new opponent for Boyfriend to fight: an impostor wanting to replace him (and no, this isn't the Impostor from Among Us. He's been there and done that).

The first mod, The Battle Between Yourself, takes place on the same rooftop Pico was fought in the original game, where Boyfriend and Girlfriend meet the Impostor Boyfriend while they were just chilling. Boyfriend proceeds to rap-battle the imposter and win three times. The overwhelmed doppelganger proceeds to leave, prompting Boyfriend to sing one more time in victory.

The second mod, The Dreadful Nightmare, takes place within Boyfriend's dream, where he encounters a silhouetted version of the Impostor Boyfriend a minute and a half into said dream when he realized he was alone. He and the "Nightmare Boyfriend" battle to the tune of The Synth Wars by Jack O'Riley. Once the silhouette is defeated, it fades away before Boyfriend wakes up. He decides to perform the Mii Channel theme to Girlfriend after waking up.

The third mod, The Rematch Between Yourself, sees Boyfriend and the Impostor Boyfriend have a proper rematch at the mall in Week 5 from the original game. In between the second and third round, however, the two managed to screw up the timeline, causing a rip in time and space to open what is known as "the Zero Zone". When Boyfriend asks him why he wanted to replace him in the first place, the Imposter Boyfriend reveals his true identity and motives.

The fourth mod, The Decisive Battle, takes place within the Zero Zone, where Boyfriend and the Impostor Boyfriend battle it out one last time.

And to think that the saga would stop there, there's a fifth one currently known in the works known as "Vs. Jack" (and yes, that is the Impostor Boyfriend's real name). Not much is known about it outside of one song.