Series / The War Next Door 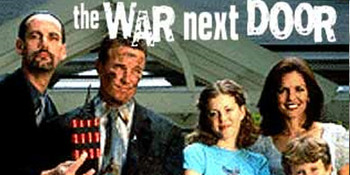 "And the eternal dance of death continues."
Advertisement:

Secret agent Kennedy Smith spent years saving the world from super-villains. After supposedly defeating his arch-foe Kriegman for the last time, Kennedy honors a promise to his wife Lili to retire. With their kids Ellis and Lucas in tow, they move to the suburbs and Kennedy gets a job as a car salesman. Less exciting and incredibly normal, Kennedy's finds his new life a breath of fresh air... until a very much alive Kriegman moves in next door with his wife Barbara. Turns out that trying to take over the world just isn't any fun without Kennedy trying to stop him, so Kriegman tries to force him out of retirement and resume their eternal dance.

The USA Network series was brought to us by the creators of The Adventures of Pete & Pete. Unfortunately, the series proved to be a massive Short-Runner - airing eight of the thirteen produced episodes.