Film / The Spirit of the Beehive 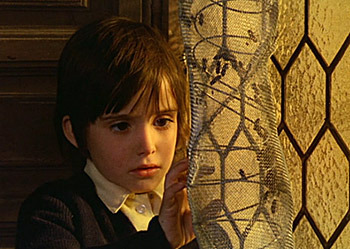 1973 Spanish slow-paced drama film with lots of symbolisms and silences directed by Victor Erice (one of the only two full-length films he made) and produced by Elías Querejeta, originally titled El espíritu de la colmena. It stars Fernando Fernán Gómez, Teresa Gimpera, and a young Ana Torrent.

Set in a remote village in Segovia, Spain just after the end of the Spanish Civil War, the film follows six-year-old Ana, who, mesmerised by a travelling cinema screening of the 1931 film Frankenstein, begins a search for the gentle monster.

It was a major influence on Guillermo del Toro - The Devil's Backbone and Pan's Labyrinth both have similar themes, particularly the latter in regards of the coming of age story of a young girl and the limits between fantasy and reality in a post-Civil War period.

It is on the Roger Ebert Great Movies List and was ranked 42nd on the List of Films You Should See By The Age of 14.