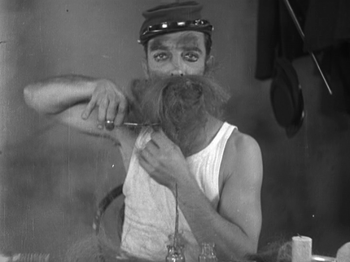 Buster plays Elmer, a humble worker in a dry cleaners. Elmer has a rather unhealthy fixation on Trilby Drew (Dorothy Sebastian), a stage actress who is playing in a show at the local theater. Elmer attends every performance of Trilby's play Carolina, wearing tuxedos that he has "borrowed" from the dry cleaners, and has also been following Trilby around town. Trilby, for her part, is in a messy relationship with Lionel, the leading man in her theater troupe. When Lionel starts stepping out on Trilby with another actress in the troupe, an enraged Trilby enters into a sudden marriage with adoring Elmer. Comedy ensues.

Spite Marriage was Keaton's second film at MGM, his last silent movie, and the last feature film for which he received a directing credit. Critical opinion is mixed on this film—it's generally regarded to be not as good as Keaton's earlier silent film triumphs, but definitely better than the sound films he'd make for MGM as his career circled down the drain.