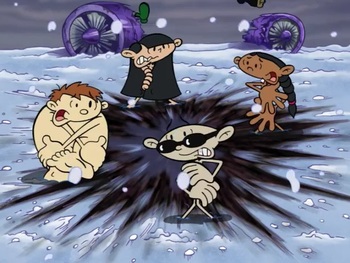 At least their hands are big enough to cover their bodies...

Though not as excessive with the "crap past the radar" moments as the other Cartoon Network-made shows of the late-1990s into the 2000s, Codename: Kids Next Door does have its moments of slinging risque jokes over the heads of the younger crowd.