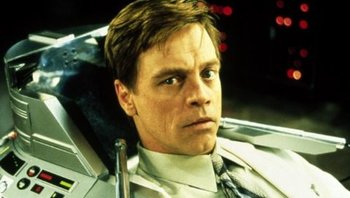 The one starring Mark Hamill.

The Control Voice: Man has taught computers to perform complex calculations, to control a factory, or to launch a spaceship, but can we teach computers to enjoy the beauty of a rose, the sound of a symphony, or the love of another human being?

When a woman a scientist is in love with goes into a coma, he uses his invention to reach her mind.

The Control Voice: As we become ever dependent on technology, we may find that a walk down the road paved in circuitry leads us on a path of no return.