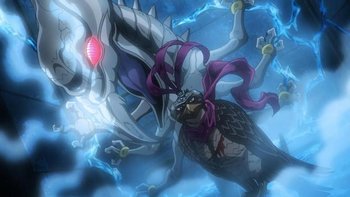 This is Pet Shop. He will eat you with a smile after he's done.
If we had to sum up all the terrors that plague the Stardust Crusaders in one word, it would be this: DIO, who not only has a new Story-Breaker Power that makes him nigh-unstoppable, but his own legions of Stand Users with very unsettling powers that invoke psychological and physical horror, on top of the majority looking like regular people or even animals so everything they meet might potentially be an assassin sent to kill them.