Recap / Charmed S3E14 The Good, The Bad, And The Cursed

The Good, The Bad and the Cursed

Phoebe's visit to a ghost town becomes a nightmare and when Leo can't help her, Prue and Cole must unravel the mystery to save her. 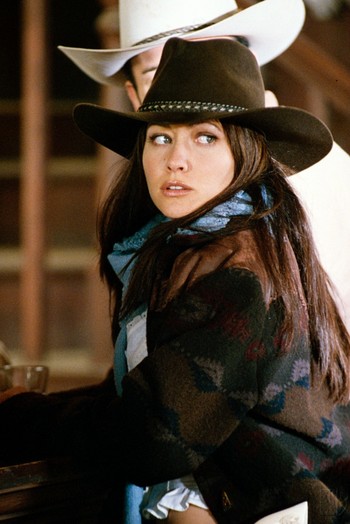 Phoebe and Victor drive into a ghost town. Victor asks Phoebe how Leo and Piper met, and is put off a bit when Phoebe says that Leo had been a handyman. He is, however, somewhat relieved that Leo seems to know Piper is a witch; he figures that's an advantage he didn't have when he married Patty. Victor is thinking of investing in the area and thinks something supernatural is scaring people away. He hoped Phoebe could help get a fix on it, but didn't know how to ask her. Phoebe starts hearing noises around her. Suddenly, two ghosts appear from the saloon. One of them, in cowboy gear, throws a half-Indian, Bo Lightfeather, out the door and punches Bo in the face, splitting his lip. The half-Indian tumbles through Phoebe and runs off, with the cowboy shooting at him. Phoebe notices she has a split lip as well.

Piper and Prue plan a rehearsal dinner. Piper set one place too many in honor of their mother. Leo orbs in while Prue is comforting Piper, much to Piper's frustration. Phoebe and Victor return. Leo starts to stretch out his hand to heal Phoebe, but Phoebe declines and suggests Victor get some old town files from the car. Phoebe then explains that Victor doesn't know Leo is a Whitelighter. She meant to tell him, but wasn't sure how he'd take it; Victor is still bitter over Patty having an affair with her Whitelighter. Victor returns with the files, but isn't sure they'll help. He decides to let the sisters tackle it while he and Leo go to lunch at a diner.

At lunch, Leo explains that he's a counselor, but the pay isn't the greatest. Victor warns Leo to be on guard in case Piper's Whitelighter tries to put the moves on her the way Sam did with Patty.

Phoebe develops a huge bruise and thinks she got it from Bo. She doesn't understand how she's getting Bo's symptoms. Prue notices nothing among the records dated past April 25, 1873; she thinks the town may be caught in a time loop. Phoebe is skeptical; the only demon they know of that can create time loops is Tempus; and they haven't heard from him in two years. Piper finds the page in the Book of Shadows on time loops; some traditions believe they can be created when a great evil goes unpunished. Phoebe thinks this may explain why she's feeling Bo's symptoms—they're supposed to get justice for him somehow. The doorbell rings and Cole is at the door with flowers; Prue flings him across the room. Cole offers the flowers for Phoebe, but Phoebe pushes them away. Prue and Piper didn't know that Cole was back (as opposed to being merely alive), but Phoebe reiterates that it's over between them. Prue is about to fling him around the room when Piper stops her; she doesn't want to risk him smashing the table. Cole says he's suppressed his demon half, and promises not to use his powers. He notices Phoebe is hurt, but Phoebe isn't interested in him comforting her. She starts to tell him to leave when she has a vision of Bo being shot — and has a gunshot wound herself.

At the diner, Victor continues to rant about Whitelighters when the sisters call for Leo. Leo orbs out in front of an astonished and angry Victor. Leo tries to heal Phoebe, but can't. Leo thinks he can't heal her because Bo was the one who was actually shot. He thinks there's some kind of psychic link between Phoebe and Bo. Cole figures that Bo must be magical as well—it's the only way they could possibly be linked. Cole thinks that the time loop exists in a separate plane from the town's actual physical location; he's moved through different planes to stay one step ahead of the Source. He proposes to shimmer into the time loop and find Bo so Leo can heal him. Prue goes with him. They shimmer out just as an angry Victor bursts in. However, Piper tells him to watch Phoebe while she and Leo orb to the town to get some answers of their own.

Cole and Prue find themselves in the ghost town. They steal some clothes and walk into the saloon. The bartender tells them that they'd best leave town as quickly as possible. He's somewhat condescending to Prue, much to her frustration. Sutter, a powerful man, is out for blood after one of his men got killed. Sutter walks in, intimidating almost everyone. He holds up a newspaper announcing Bo's impending death. Suspecting Bo killed his henchman, he demands that Bo's elder sister Isabel tell him where Bo's hiding. However, Isabel won't talk. He then turns to another man in the bar, Cal, who claims he doesn't know anything. Sutter suspects Cal is lying, and one of Sutter's men stabs Cal in the hand. Prue shoves the henchman away and tries to tend to Cal. The henchman takes a swing at Prue, but Prue blocks it and smashes a whiskey bottle over his head. She then pulls two pistols and shoots another henchman's gun out of his hand. The third henchman pulls his gun, but Cole levels a sawed-off shotgun at him. Sutter, however, doesn't want to fight them just yet, and he and his men leave.

Isabel explains to Cole and Prue that Sutter has close ties to railroad interests. He'd promised to bring tracks through the town in return for part ownership of all the businesses. Several people resisted, and in response Sutter and his men took over the town. Resistance ended after his men killed the sheriff. Prue offers to help Bo, and Isabel says that she's been expecting them; Bo had seen them in a vision. His father, a powerful medicine man named Soaring Crow, also had the power of premonition. However, he died when Isabel and Bo were young, and their mother didn't allow Bo to use his powers. Cole thinks killing Sutter will break the loop, but Prue isn't so sure—and besides, good beings' first instinct shouldn't be to kill. The three ride off to meet Bo.

In the present, Piper and Leo look through the ghost town and enter the old saloon. They find only the newspaper Sutter held up earlier, announcing the coming death of Bo at sundown. They orb back to find a way to warn Prue; she thought they had until midnight.

Victor tends to a weakening Phoebe, who fears she's dying. Leo and Piper orb back in. They give Phoebe the newspaper and she tries to give Bo a vision.

At a boarded-up church where Bo is hiding out, Cole tries to get Prue to trust him. Prue, however, warns him to leave them alone after this, unless he wants to get vanquished, but Cole retorts that being vanquished is the only way to keep him from Phoebe. Isabel, Prue and Cole head into the church. Bo is dying from his earlier gunshot wound. He is suspicious of Prue and Cole, thinking they're working for Sutter. Prue tells him that Phoebe got a vision of him being shot, but Bo still doesn't believe them and pulls a knife. Isabel tells Bo that Prue and Cole stood up to Sutter, but Bo sees the same evil look in Cole's eyes as Sutter. Cole, at Prue's suggestion, proves he's magical by shimmering to Prue's other side.

At the newspaper, Sutter orders his men to snuff out any efforts Bo makes to stir up opposition. He also reveals that he plans to buy up the entire town and sell the land once the railroad comes through. Cal arrives and says he knows where Bo is hiding.

Back at the church, Prue telekinetically removes the bullet from Bo's side; he screams, and so does Phoebe, when they get a vision of Sutter flogging Bo in the town square before shooting him in the back. Bo now accepts Prue and Cole's help.

Phoebe is horrified, especially since nobody came to Bo's defense. Victor wants to do something, but Leo thinks it's all up to Prue and Cole. This only angers Victor even more, but Leo replies that Prue isn't going to let Phoebe die—and neither is Cole. Phoebe realizes she still loves Cole.

Sutter and his men track Bo to the church. Cole wants to shimmer Bo out to Leo, but Prue doesn't think getting Bo out will break the time loop. Cole doesn't understand; he's convinced saving Bo will save Phoebe. Prue retorts that there's a greater good at stake. Bo doesn't think the time loop is about him, but the townspeople. According to a legend from his father's tribe, the townspeople are cursed to live the same day over and over until they can stand up to Sutter without fear. Bo gives himself up so he can give the townspeople a chance to help him. Sutter's men tie him up and drag him back to town and Sutter flogs Bo in the street. Phoebe cries out in pain, but Bo refuses to make a sound. Prue and Cole encourage the townspeople to stand up to Sutter.

Finally, Sutter draws his gun and is about to shoot Bo. Suddenly, the bartender grabs a rifle and shoots Sutter's gun out of his hand. Cal and several other townspeople draw their guns on Sutter, who grabs Isabel by the hair and uses her as a human shield. With everyone distracted, Sutter throws Isabel to the ground, mounts his horse and rides away. Prue follows him; she shoots at the ground and Sutter's horse throws him. Prue shoots Sutter in the chest. Mortally wounded, Sutter goes for his gun, but Prue flings him through the sheriff's office door. In the saloon, Cole runs out of bullets, and blasts his opponent with an energy ball. Prue sees him do this. The time loop is broken.

By the time Prue and Cole shimmer back in, Phoebe is fully recovered. Cole decides he should leave, but Phoebe asks him to stay, filling in that extra place at the table. They kiss. A crow is then shown on the windowsill.