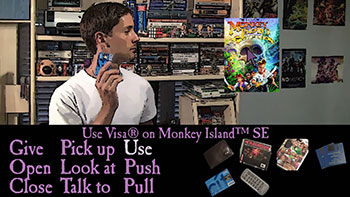 Sometimes comes with extra Art Shift.
"And that’s exactly what games of this type should be about. Video Games are, after all, escapism, so if you can, say, play Tennis adequately in real life, a realistic tennis video game should eventually make you feel like Roger Federer."
— Johnny Magrippis, on how Kinect Sports should have been.
Advertisement:

is a Video Review Show with surprisingly high production values, Johnny likes to overanalyze Video Games, to the point of each episode averaging at about 15 minutes, despite him talking in nigh-incomprehensible speeds.

The JRT Show focuses on current-gen stuff, but the videos never come out closer than two weeks after the game’s release, so they aren’t really meant to be a buyer’s guide. They always seem to include a brief history lesson and a couple of sketch bits, in order to be enjoyable even if you aren’t familiar with the franchise / genre and especially if you’ve already played the game in question.

Despite this, he always wraps up with a multiple choice verdict, guessing at the type of person you’d have to be in order to buy and enjoy the game and, for multiplatform games, he even compares the different versions against each other.

The review alternates between Johnny narrating over game footage and him getting in front of the camera to talk directly to the viewer. In either case, he talks crazy fast, but the audio quality during the narrated bits has been improving over the years.

Hasn’t settled on a "trademark genre", wildly going from Sports Games to Point and Click Adventures and RPGs.