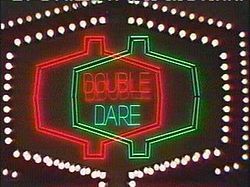 Game Show created by Jay Wolpert for Mark Goodson, which aired on CBS from 1976-77. Host Alex Trebek read a series of clues to two contestants, who were in Sound Proof Booths. When one player buzzed in to guess the subject, the other player's booth closed. An incorrect answer resulted in a "penalty clue" and free guess for the opposing player. A correct answer was worth $50 and allowed the player to Dare their opponent to guess the answer with the next clue for $100. If the dared player missed, the darer could "Double Dare" with one more clue for $200. A correct answer on a Dare awarded $50, while one on a Double Dare awarded $100. The first player to score $500 won.

Not to be confused with Nickelodeon's Double Dare, which is a very different (and much messier) show.