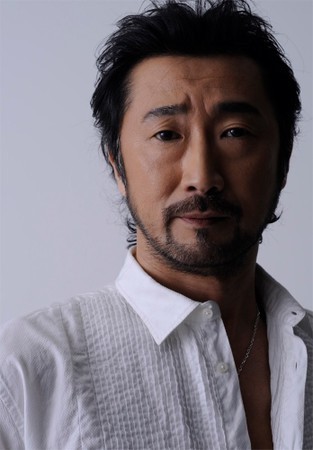 Snake: Colonel, I need you to describe my seiyuu here for me.

Colonel: You want to know about David Hayter, huh, Snake?

Snake: No, Sutherland voices Big Boss. Not my English voice actor, Colonel, but my Japanese seiyuu.

Colonel: Oh, right. My mistake. Akio Ōtsuka, born November 24, 1959, is one of the most respected veterans in the seiyuu business. He's the son of another veteran seiyuu, the late Chikao Ohtsuka, making him an old son. In fact, following his father's death, Ōtsuka has taken over his father's past roles. Until a few years ago, he was also married to another seiyuu, Yoko Soumi, known for her Vamp, serious lady or Femme Fatale roles, like Karen Kasumi from X1999 the TV series and Atsuko from YuYu Hakusho.

Snake: So he's part of seiyuu royalty, eh? I wouldn't be surprised if his kids became seiyuu as well.

Colonel: Known for a deep, gruff voice that fits him into veteran-like roles, Ōtsuka often lands characters who are widely considered Badass, making him quite a fan favorite amongst older seiyuu. He'll gladly do humor roles as well.

Snake: Going from serious to humorous, eh? Wouldn't it be best to stick to one role?
Advertisement:

Note: May also be spelled as "Ootsuka" or "Ohtsuka" instead in romaji. He also appears in live-action roles in TV, movies and video games from time to time.

His English counterparts are Crispin Freeman and Jamieson Price for California, Kent Williams for Texas, and Scott McNeil for Canada.