Moment pages are Spoilers Off. You Have Been Warned. 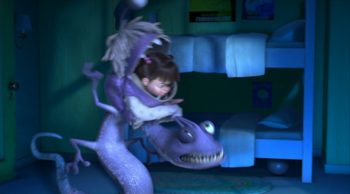 A small child, vs a literal Smug Snake. The small child wins.note Not pictured here (but making the scene no less awesome) is Boo, a few moments later, beating him with a baseball bat.
Advertisement: