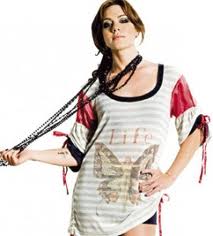 Is she really a hazard?
Advertisement:

Vanessa Joy Amorosi (born 8 August 1983) is a singer/songwriter from Melbourne, Australia. She started performing at the age of 12 with the help of her parents. Signed in 1997, after singing in a Russian restaurant in Melbourne, she went on to record a demo called "Get Here". She eventually released a song called "Have A Look" which was rather successful in her home country of Australia, but "Absolutely Everybody" (1999) was her ultimate successful song of this era which became extremely successful worldwide, eventually ending up being performed at a New Year's Eve gig. It was also the longest charting single by an Australian female artist. The album "The Power" was also extremely successful. She sang "Heroes Live Forever" at the Sydney Olympics. She also released a second album in Germany called "Change". It was mildly successful.

She had to take a rather long break for her former management deal to end but she transferred to "Ralph Carr Management" in 2006 which helped her get a Universal recording deal. This allowed her to release "Somewhere In the Real World", which was a more sophisticated and experimental album, featuring sounds such as rock, jazz, soul and swing. Greg Wells (Colbie Caillat and The Veronicas) and Cliff Magness helped her on this album. This album produced successful songs such as "Perfect" and "Kiss Your Mama!". That album went gold in Australia. She also collaborated with Hoobastank on "The Letter", which was rather successful too.

Soon after this "Hazardous" was created, on which she worked with Macho Psycho. It came rather quickly after 2008's "Somewhere In The Real World" and featured the hit song "This Is Who I Am" which was Vanessa's first No. 1 in her home country. The album featured more electric rock, power pop, pop rock, rap and soul moments. It was a success going gold on its first four weeks of charting in Australia. Other singles included: Mr. Mysterious, Holiday, and Hazardous.

She has recently released songs called "Gossip" and "Amazing" which were minor successes.

Considered one of the most talented vocalists to come from Australia outside of Gabriella Cilmi. All her albums have gone gold, her singles go top 10 and her music is always rather original and cutting edge. She, Samantha Jade and possibly Elen Levon are the closest Australia has to Britney Spears musically. Her singing is also a lot like Britney, especially when she was younger.