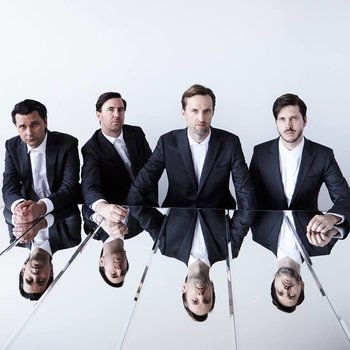 Lights and music are on my mind...
Advertisement:

Cut Copy are a band from Melbourne, Australia that formed in 2001 and deals primarily in electronic music.

It initially started out as a home-recording project by Dan Whitford experimenting with sampling machines in his spare time. While making the debut album Bright Like Neon Love, his sampling machine broke which led to him bringing in his friends Tim Hoey and Mitchell Scott to help finish the record. The album was released in Australia in 2004, and a year later started to gain some traction internationally which led to the trio having to put together a live set-up to tour the album.

In 2008, the band achieved breakthrough success with their second album, In Ghost Colours (America and the UK got it in 2009), debuting at #1 on the Australian album charts. It remains their most critically-acclaimed and well-known album to this day.

Around this time, the band expanded their line-up adding bassist Ben Browning as an official fourth member, and in 2011 released their third album Zonoscope, which took a more experimental direction by incorporating elements of world music. They immediately followed it up in 2013 with Free Your Mind, a more straightforward dance album heavily influenced by late-1980s house mixed with the ethos of 1960s psychedelia.

After a short break, they began work on their fifth album and released Haiku from Zero in 2017, where they returned to a more experimental approach bringing in some prog and funk elements into their sound. A documentary about some of the ideas behind the album called Don't Let Me Die Tonight

was released a year later.