Film / Any Questions for Ben? 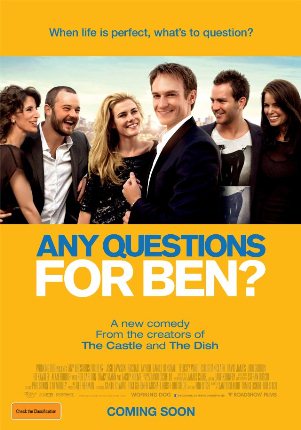 "Yeah, aren't you the guy from Sea Patrol?"
"Never mistake motion for action."
—The Ernest Hemingway quote that opens the film

Any Questions For Ben? is a 2012 Australian comedy film by Working Dog Productions. It stars Josh Lawson, Rachael Taylor and a slew of Australian actors and comedians.

Ben (Lawson) is a 27-year-old brand manager living in Melbourne. He's well-paid and swimming in women, but since dropping out of university he's never held down a job for more than seven months and never had a girlfriend for more than three. He's living the high life, until he's asked to speak to the students of his former high school alongside human rights lawyer Alex (Taylor) and Olympic archer Jim (Ed Kavalee), and none of the students have any questions for him. This seemingly innocuous event sends Ben into the beginnings of a "quarter-life crisis" as he realises he's never accomplished or followed through on anything in his life. His existential wanderings are set against a burgeoning relationship with Alex, his latest job (relaunching a line of sportswear) and his best friend's happy relationship.