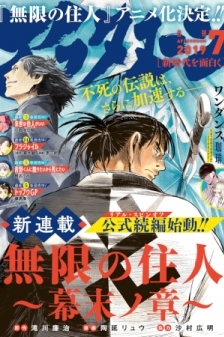 Eighty years after the final battle with the Ittou-ryu, but ten before the original series’ epilogue, Manji returns to Japan after living in America. It is the tail end of the Bakumatsu Period (1853-1867) and he meets a new companion named Ryouma Sakamoto. The two team up and head to Kyoto to "save people", working with the Tosa Imperialists to potentially lead Japan into a bright future. Ryouma feels that way, at least; Manji isn't so sure. He gets roped into politics and fights after a descendant from someone in his past tries to spur his involvement.

Story by Renji Takigawa, manga by Ryuu Suenobo, in collaboration with Hiroaki Samura.

The following information contains unavoidable spoilers for the original series.