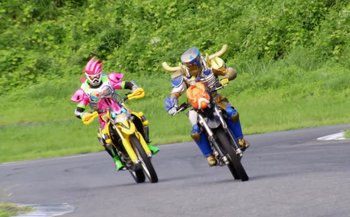 The Bugster's mind filled with dread when he realized that Ex-Aid wasn't trying to move past him because the Rider had a... Blue Shell!

Emu's mood is in the dumps after he lost his Gashat to Taiga. He doesn't have time to mope, however, as into his office comes Kiriya Kujo, a coroner who's been investigating the Bugsters on his own ever since they took his friend's life five years ago. He comes in with a deal - he will take back the Mighty Action X Gashat from Taiga under the condition that Emu will help him out. The intern is reluctant, but since Kiriya came with his coworker that is already afflicted with the Game Syndrome, Hojo feels obligated to save him, thus agreeing.

Soon the Game Virus emerges and all Riders converge unto the beast's location. There, Kiriya makes a bet with Taiga - if he manages to defeat the Bugster, he will take back Emu's Gashat. And if he loses? Why, he'll give him his own Gashat - for the coroner is the newest Gamer Driver user to arrive on the scene - Kamen Rider Lazer!