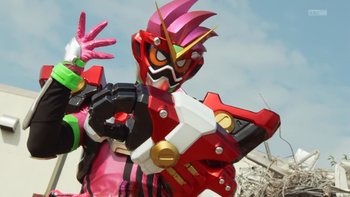 Sweet baby Jesus... IT'S A GUNDAM!

While running late for work, Emu comes across a man lying on the side of the road. To his horror, the intern realizes that the man is the newest victim of the Game Syndrome, and quickly calls the rest of CR for assistance. They've already got more than enough on their plate, though. Good news is, the 4 new Rider Gashats that will allow the Doctor Riders to reach Level 3 have finally been completed! Bad news: someone managed to sneak into Genm Corp. and steal them!

When Asuna and Hiiro arrive to aid Emu, they are shocked when they realize that the infected is in fact the very man responsible for the theft! Kagami is willing to let the man rot, but Hojo believes that lives must be saved, no matter if they're good or bad. No time for discussions, as a mechanical Bugster appears, with one of the stolen Gashats, the Gekitotsu Robots, attached to his head. And alongside him, the black Ex-Aid! The dark Rider again transforms into his nigh-invincible Level 3 form, defeating our heroes.

Later on, the CR team is able to track down the Bugster, but so did Lazer and Snipe - both promised by the CEO of Genm Corp., Dan Kuroto, to be able to keep any Gashat that they'll retrieve. And to add to all of that, the black Ex-Aid also comes in to join the battlefield! And Kiriya claims to know his true identity?! Finally, all 5 Riders are gathered for a clash like no other!!