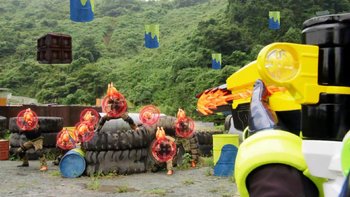 I've taught you so much, but I want you to understand this: The taste of the bullet is a taste of defeat.

As Emu attempts to aid a young patient with a fear of doctors, it quickly becomes apparent that the boy is infected with a Bugster Virus. A mysterious man named Taiga Hanaya appears with a Gamer Driver. He is the First-Person Shooter-themed Kamen Rider Snipe, one of the original CR Kamen Riders! Snipe is able to make quick work of the Bugster's monster form, but in turn terrifies Emu's patient. Emu soon learns that Taiga got too much into the gaming aspect of the CR's struggle, which cost his patient's life and his medical license. Snipe makes a bet with Ex-Aid - the first to slay the Bugster may keep the other's Gashat Cartridge.

Back at the hospital, Emu and Asuna attempt to cheer up the young boy, with little success. Emu decides to confront Taiga, who has set up in an abandoned hospital a few blocks away. As Emu attempts to talk Taiga into staying away from his patient, the pair are attacked by Bugster mooks. Taiga proves himself equally skilled without his belt and deduces that the reason they were attacked is because the patient is afraid of doctors.

Ex-Aid, Snipe, and the newly arrived Brave catch up with the Bugster. However, Brave and Snipe seem more interested in fighting each other than the Bugsters, leaving Emu to fight a squad of gunner type mooks all by himself. It's made worse when the lead Bugster gives his army phantom images of himself, making the battle a shell game. Ex-Aid slays them all, before charging his finisher for the true Bugster leader... or is it? As it turns out, that one was a clone too. Snipe aims at Ex-Aid, only to shoot the invisible Bugster behind him. He takes Emu's Mighty Action X cartridge, and mockingly offers to play again... if Emu can transform. However, the young intern doesn't care. He saved his patient, and helped the boy face his fear.

This Episode Contains Examples of: