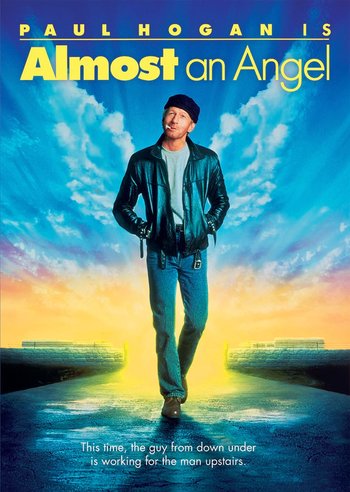 Who does he think he is?
Almost An Angel is a 1990 supernatural Comedy starring Paul Hogan as Terry Dean, a skilled burglar who has just been released from jail. Knowing he's too skilled to pull off his standard jobs and not be caught for being recognized, he tries to go into the field of bank robbery using Latex Perfection to disguise himself. However, shortly after he gets started, he sees a child about to get hit by a car, and so he rushes to protect the child, taking the hit from the truck himself. Laying in the hospital, he has a dream where God tells him that his act of self-sacrifice, though pure instinct, has earned him a second chance, and he will be sent back to work as a provisional angel. Dismissing the dream, Terry attempts to rob another bank once he's out of the hospital, only to run into another group of bank robbers. One of them shoots Terry point blank, and he is unharmed (the leader of the gang knew the shooter would be nervous, so he loaded the gun with blanks, but Terry had no way to know this). Now accepting that his dream was real, Terry decides he'd better live up to his provisional angel status, and starts working to help others, Hilarity Ensues. The film also stars Elias Koteas, Linda Kozlowski note who worked with Hogan previously on "Crocodile" Dundee. and a cameo by Charlton Heston as God.