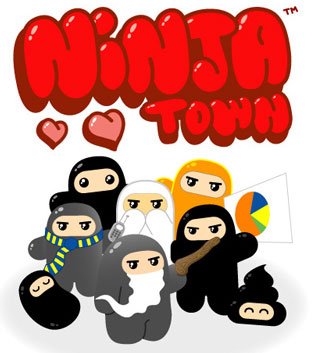 Now that that's out of the way, Ninjatown is a Tower Defense game for the Nintendo DS, developed by Venan Entertainment released in 2008.ADORABLE based on the "Wee Ninja" character by toy designer and former Electric Gaming Monthly editor Shawn Smith.

The town of Ninjatown, populated by Wee Ninja and their brethren, is at peace, until the local volcano Mt. Feroshi erupts and an army of demons led by Mr. Demon attacks. And he wants Ninjatown's famous Ninja Star Cookies! or more accurately he wants the recipe in order to flood the market with imitation cookies and take control of the island by devaluing the stocks of the ninja, according to the Business Ninja (yes, there are ninja in business ninja suits in this game).

It's not bad for a game based on plush toys and other merch, but it is horribly short and easy, or less short because you're stuck on some levels that you find ridiculously hard, depending on your ability for finding the best strategies. While the game may be simplistic to a fault and lacking in replay value, its tongue-in-cheek humor and colorful take on the tower defense system make it worth checking out.

This game provides adorable examples of: