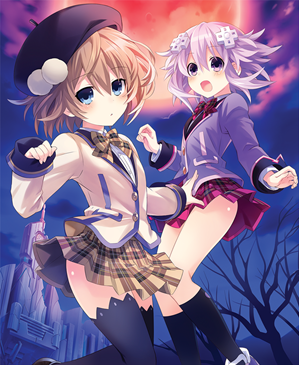 MegaTagmension Blanc + Neptune VS Zombies is the fourth spin-off in the Neptunia series, as well as the third title in the series to be developed by Tamsoft, and starring Blanc as the main character. Much like the previous spin-off, Hyperdimension Neptunia U: Action Unleashed, it's a Hack and Slash, but now with some elements of hunting games mixed in as well.

It is set in Gamicademi, a school located in Gamindustri which the CPUs are attending to learn more about human culture. Due to a rash of declining birth rates and dropping attendance, the school is facing the threat of closure. In an attempt to save the school, Blanc and Neptune decide to film a zombie movie to drum up new interest. Conveniently, real zombies begin showing up everywhere. Instead of running away, they seize the opportunity and clear out the zombies while shooting their flick.

Co-Op Multiplayer is available for the first time in the series, in local and online formats. The playable cast of Hyperdimension Neptunia U return, including Famitsu and Dengekiko, as well as Plutia and Peashy from Victory, and Uzume from Megadimension VII, with newcomer Tamsoft rounding out the playable characters. It was released for the PlayStation Vita on October 15, 2015 in Japan, and in May 2016 in North America and Europe. It was also released on Steam on October 3, 2016.