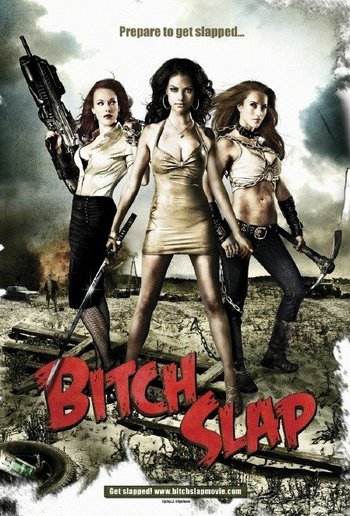 Exactly What It Says on the Tin
Advertisement:

Three gorgeous women in the middle of a desert with a beaten, nearly naked man in the trunk of their hot rod. As each gets out of the car, there is a long, slow-motion lingering shot, starting at each woman's long, shapely legs, tight bottoms, sliding up to ample bosoms, and finally reaching their faces.

...thus begins Bitch Slap, a 2009 movie that had a very limited initial release, but made quite an impression at various film festivals and eventually made it to DVD release in March, 2010.

The makers of this film, alumni of Sam Raimi's Hercules and Xena franchises, sat down one day, between projects, and tried to think: "how do we make a movie that people will watch with a limited budget and using only day shoots?" The answer, of course, is to simply put sexy girls Hel (Erin Cummings), Trixie (Julia Voth), and Camero (America Olivo) in revealing outfits in the middle of the desert, then have them fight, flaunt, and fornicate their way through a convoluted, Troperiffic plot.

Of particular note here is the involvement of kiwi Action Girl stuntwoman and fight choreographer Zoë Bell. The producers again called in favors from their Xena: Warrior Princess days; she was Lucy Lawless's stunt double. Her influence and expertise is one of the things that elevates this movie from mere exploitation schlock to awesome exploitation schlock.