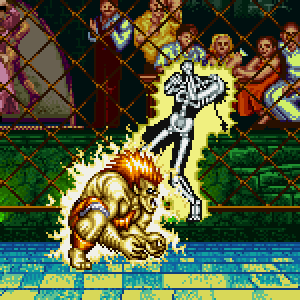 "I'd also be shocked if I saw someone like that."
Advertisement:

The application of high voltages to animated flesh and bone renders the former translucent and the latter luminescent, allowing the skeleton to be seen in the style of a classic X-ray for as long as the current flows. Stock Femur Bones may be involved and sometimes other funny or unusual things may appear.

Despite the impressive light show, the victim will usually suffer no ill effects beyond looking a bit singed and shocked. On the other hand, a Disintegrator Ray (which is far more likely to be lethal) can also produce these sparks as it zaps the victim to dust (or leaves only the skeleton behind).

The trope name is a tribute to the "X-Ray Specs" that have been advertised in the back of comic books since time immemorial.

While definitely not Truth in Television, the source of this trope is probably the fact that a really high voltage is required in order for an X-Ray machine to produce pictures of your bones.

Not to be confused with taking an X-Ray of a Spark, or Hit Spark.

Hey Rain You Better Stop That!

Patrick is seen yelling at the rain which causes a thunderstorm to electrocute at him.

Hey Rain You Better Stop That!

Patrick is seen yelling at the rain which causes a thunderstorm to electrocute at him.