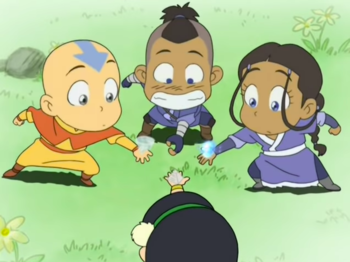 One, Two, Three, BEND!
Don't make me use my moon powers on you!
—Princess Yue

The "Super Deformed Shorts" are three short episodes on based on the animated series Avatar: The Last Airbender that were released on the season 2 DVD (season 3 in PAL regions).

This short series uses a chibi art style and soft pastel colors to tell funny, blatantly non-canon stories about the series' characters, one of which was set in a strange elementary school AU. The characters are depicted as much younger than their canonical incarnations and interacting in light, improbable ways.

More information, including plot summaries of the three episodes, can be found on the relevant page

of the Avatar: The Last Airbender wiki.

These shorts contain examples of the following tropes: