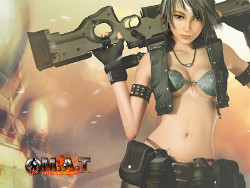 (MAT) is a free-to-play first person shooter game produced by Wicked Interactive Ltd. and Suba Games. Set 20 Minutes into the Future, MAT offers a variety of gametypes. Deathmatch and Team Deathmatch are present, but MAT offers a selection of more unique gametypes, including a mode pitting a team of normal players against a team of highly translucent 'ghosts' that fight only in melee, and a tank mode, which is Exactly What It Says on the Tin.

The game started off as something of a Counter-Strike clone, but recent patches have yanked the game hard in a more anime-themed direction. Some voiceovers and effects remain from the original themes, but new patches introduce new weapons and effects that solidify the new direction of the product.