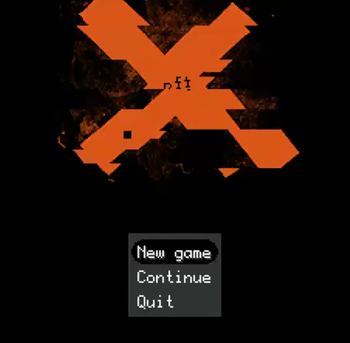 The slightly altered title screen of the original.
" I should have known it wasn't going to be that simple."
—Zacharie

UNKNOWN is a fan spinoff of freeware RPG Maker OFF, created by Claude Huggins

The switch had been turned OFF. A world died and the credits rolled. Now, returning to the dead realm, you come face to face with the former merchant Zacharie, who offers his help in restoring the world that you and The Batter destroyed. With a mission of your own, you and Zacharie set off to right a great wrong.

Unfortunately, it will not be easy — standing in your way is Seneca, a wicked fox who wants to remake the world in his own image.

You can get the game here

. A sequel was in the works, but was canceled. A spinoff entitled 365 can be found here