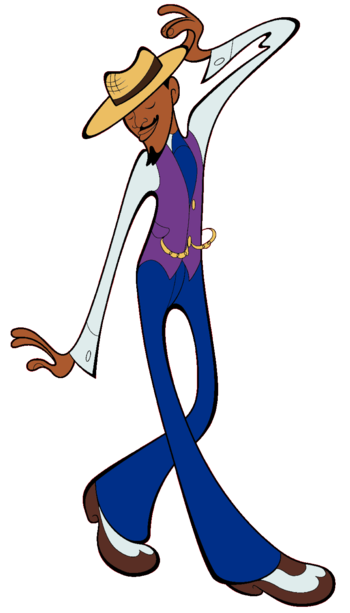 Voiced by: Andre 3000
Like... You gotta crank this thang up!
A pop/jazz/blues superstar with a legion of fans around the world. After becoming sick of the commercialism and soullessness of the industry, he returns to his hometown of Bankhead, Georgia, where a chance encounter with students from his old school restores his love of music and makes him agree to become their teacher.
Advertisement:
Lil' D

Voiced by: Small Fire
Let's crank dis thang up!
A student at the Westley School for the Performing Arts who idolizes Sunny to the point of obsession. Li'l D dreams of being a superstar of his own one day (and already has the ego that goes with fame), and loves to hatch schemes along with his classmates to make that dream come true. He plays the drums (in all forms, including kit and bongos) in the group's musical numbers.
Madison Spaghettini Papadopoulus 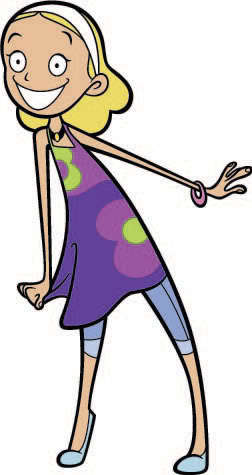 Voiced by: Jennifer Hale
The sweet but ditzy member of the Class of 3000. Madison is a Cloud Cuckoo Lander in the extreme, often making up words or not paying attention to conversations. Despite her obliviousness, though, she has a kind soul and often serves as The Heart of the group. She plays bowed string instruments, including violins and fiddles, in the class.
Phillip P. "Philly" Phil 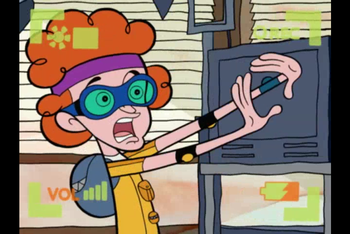 Voiced by: Phil LaMarr
The lanky and awkward Gadgeteer Genius of the Class. Philly Phil serves as the group's tech expert, often providing them with all kinds of bizarre machinery and robotics for their plots. His odd personality masks some hidden insecurities, and he values the Class as his friends. His instrument is the bass, both in the traditional upright sense and the rock guitar.
Edward "Eddie" Phillip James Lawrence III

Voiced by: Tom Kenny
The insanely rich Southern boy of the Class of 3000. Eddie's main contribution to the class's various antics is his seemingly limitless bank account—his father is the head of the "Earth Division" of Cola Cola and owns extensive property (such as every television studio in existence). Eddie is far from spoiled, though, and genuinely loves music and his classmates. He plays woodwind instruments, including the clarinet (his favorite) and other horns.
Tamika Jones

Voiced by: Crystal Scales
Prove it or move it!
The loud, sassy, and stubborn member of the Class of 3000. Tamika is never afraid to make her opinions known, and even less afraid to back up her claims with a few punches. Despite her self-confessed "bad attitude," though, she likes her classmates (even though she's often exasperated by them). In the group's more traditional numbers, she plays a harp, but is also quite skilled on guitar and other percussive stringed instruments.
Advertisement:
Kam Chin 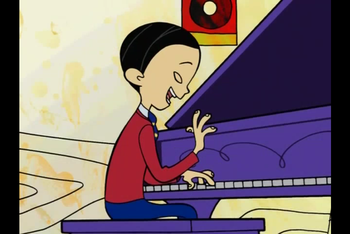 Voiced by: Janice Kawaye
The book-smart and polite member of the Class of 3000. Kam is something of a stick-in-the-mud (especially compared to his twin Kim), often trying to approach problems from a logical perspective or becoming excited about homework and learning. He still accompanies the group on their adventures, though, and genuinely enjoys their company. His instrument of choice is the keyboard and piano.
Kim Chin

Voiced by: Janice Kawaye
The clothes-obsessed and "popular girl" of the Class. Kim is always trendy and on-point, expressing interest in celebrities, the latest gadgets, and (especially) hot new fashions. She often butts heads with her more conservative twin Kam, but the two love each other deep down. She has the most variety in her instruments, playing percussive items that aren't drums or the keyboard, including maracas, castanets, the xylophone, and the turntables. 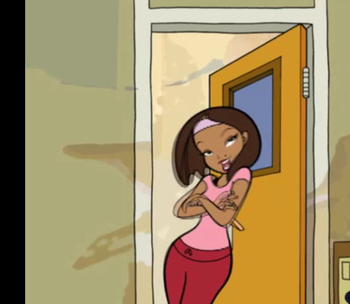 The dance teacher of Westley who has a crush on Sunny (who seems to reciprocate). She doesn't have a lot of luck in teaching her dance class students 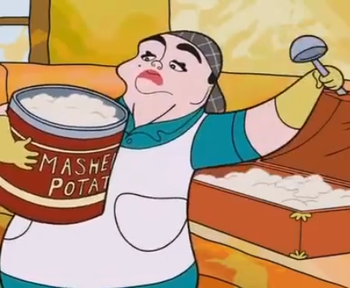 Principal Luna
Voiced by: Jeff Glen Bennett
The principal of Westley, who gets into outrageous schemes.
Jan the Janitor
Voiced by: Jeff Glen Bennett
Westley's janitor who used to be a part of Sunny's "Funkaneers".
Coach Barnum
Voiced by: Tom Kenny
The gym teacher of Westley
Preston
Voiced by: Tom Kenny
An upperclassman that attends Westley, who often bullies the other kids.
Marlon Wilkes Booth
Voiced by:
An upperclassman that attends Westley. Very dedicated to theatre. 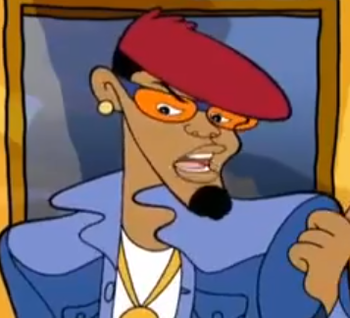 Cheddar Man is one of Sunny's friends (and a former member of the "Funkaneers"), who usually tries to make money with his schemes.

A gorilla that Li'l D befriends. 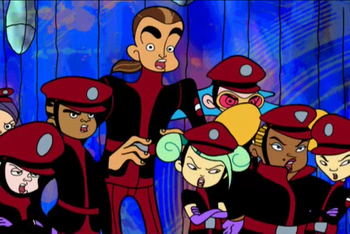 The teacher and kids from a rival school, Eastley School for Performing Arts

Those Who Really Don't Fit Anywhere Else

open/close all folders
The Blob
A mass of industrial whatever that came to be when, years ago, the Funkaneers accidentally mixed sloppy joe with some kind of toxic waste.
Big D, Mr. Yin, and Mr. Min
Voiced by: Kevin Michael Richardson (Big D), Tom Kenny (Mr. Min), Phil LaMarr (Mr. Yin)
The executives of Soul Stack Records.