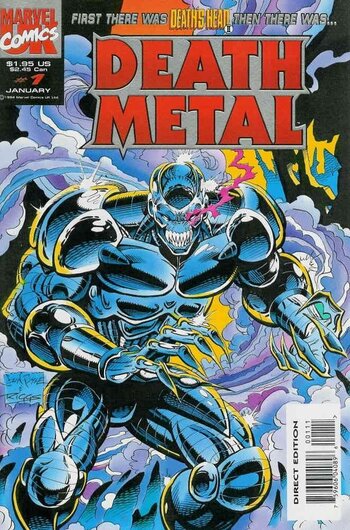 Death Metal is a 1993 comic miniseries published by the Marvel UK imprint of Marvel Comics. It's written by Simon Furman and illustrated by John Royle and Robin Riggs, with color art by Sophie Heath, Louise Cassell and Euan Peters.

The titular Death Metal is first introduced in Death³, as the most advanced (and most powerful) of the various Minion cyborgs created by the villainous Dr Necker. Death Metal is made from the mystical living metal Prometheum, giving him a mutable liquid metal form.

Like his two predecessors, Death's Head II and Death Wreck, he abandoned his creator and went rogue. Unlike his predecessors, he did this immediately after being activated, due to some level of Artifact Domination - the Prometheum used for his body came from servants of the demonic Magitek entity Charnel and its murderous influence warped his thinking.

Later in the Death³ series, Death Metal was shocked back to sanity by the Ghost Rider's mystic penance stare. Allied with his two predecessors, he then defeated Charnel, at which point the three amicably parted ways.

The Death Metal series picks up some time later, with the revelation that the Ghost Rider's cure was only temporary. Death Metal has lost control and slipped back into his murderous behaviour, an unstoppable, mindless berserker who's now killed entire worlds.

When another intervention lets his mind surface again, he has to face what he's done. And then he has to decide if he can keep living or if - for the greater good - Death Metal needs to die. But if he does, just how does an unstoppable killing machine who cannot self-terminate actually die?

In parallel with that, other forces are also becoming aware of his recent rampage. And they're impressed. Death Metal may want to change his behaviour, but they like him just as he is. Although perhaps he'd be even better if he directly worked for them...