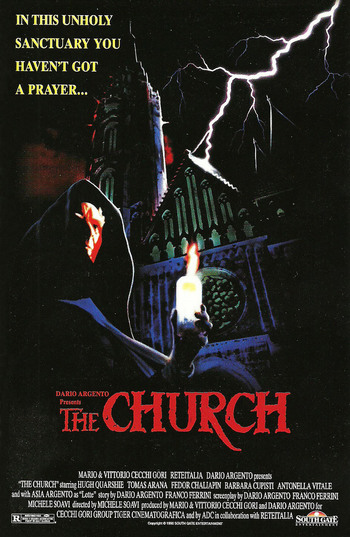 The Church (or La Chiesa in the original) is a 1989 Italian horror film written and produced by Dario Argento and directed by Michele Soavi.
Advertisement:

In The Middle Ages a village of accused heretics and witches are slaughtered by the The Teutonic Knights. The bodies are buried in a hole and a church is built on top of the burial site to contain the evil spirits.

Fast forward to The '80s when Evan (Tomas Arana), a newly hired librarian uncovers the church's past and unwittingly breaks the seal and releases the vengeful spirits of the slain villagers. The Demonic possesssion or 'contagion' as it is referred to spreads like the common cold and soon, a switch is hit that seals the evil inside. Sadly, a wedding party who show up half way through the movie are trapped inside the Church with demonic spirits.

A few main characters are developed early on, but by the midpoint they're largely forgotten about when the aforementioned wedding party shows up.

In typical Dario Argento style, the film is short on story and script but big on set pieces and visuals and gore and naked women having sex with demons and Goblin.