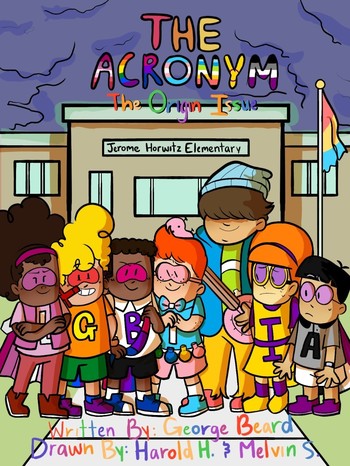 The Acronym is a Captain Underpants group fan comic on Tumblr and Instagram, written by user kittykatgeorgie

and illustrated by various other users. While mainly based in the continuity of The Epic Tales of Captain Underpants, it does include various elements from both the book series and Captain Underpants: The First Epic Movie.

After a fateful day of getting exposed to the school cafeteria leftovers, George, Harold, Melvin, Erica, Bo, Gooch, and Other Sophie develop super powers (Harold getting Super Strength, George getting Hypnotic Eyes, Melvin getting Invisibility, Erica getting Telekinesis, Bo getting Voluntary Shapeshifting, Gooch becoming a Master of Illusion, and Other Sophie getting Teleportation). After discovering this, and that they’re all part of the LGBT community, they decide to become a queer-themed superhero team.

You can start reading this comic here