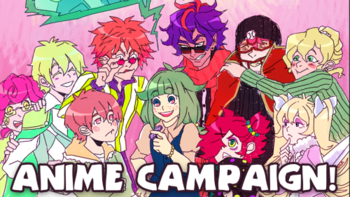 The title image for Episode 4.
"There are those born with powers known as epithets. Epithets are based on a single word that user holds close to their hearts, like fire, hunter... or soup."
—The opening narration to Bliss Ocean Curiosities.

is a roleplaying campaign run in Unforgotten Realms

by Jello Apocalypse and other guest Game Masters, hosted on the twitch channel SurpriseRoundRPG

In the world of Anime Campaign a select minority of people are born with mysterious magical powers called 'epithets', a randomly selected word that grants (usually) fabulous powers to its bearer. People who do not possess epithets are called 'mundies'. One in every 30-50 people is an epithet user.

Recently, an anti-epithet terrorist cell known as 'Bliss Ocean' has been stirring up trouble in the wake of the emergence of a supposed epithet-stealing necklace. Sparks fly as they clash with an opposing faction known as the Bushido Blasters who are also seeking the necklace for ambiguous reasons, prompting a crack team of epithet-using police to be sent to the sleepy rural town to investigate starting the main plot.

Every episode, minus 0 (tournament arc), can be found on the Surprise Round RPG twitch channel. Each episode is based on a different anime genre with a randomly-generated title of three words, and lasts longer than the estimated lifespan of the universe. note For the duration of Jello's web series Epithet Erased, all episodes of Anime Campaign (sans the filler sessions) have been taken off the channel to prevent spoilers, with plans to reupload them at some point.

All episodes so far (minus zero, one, and two) also have 'Part 0' episodes, which are roughly around two and half hours long, done to help the players get into the mindset of their characters. They are also on the twitch channel.

The main campaign ran by Jello completed in January 2018, with him revealing plans to develop it into a web series, starting with Episode 0 as a way to test if the system works. This would develop into the VRV animated series Epithet Erased, which made its premiere in November 2019. Tropes for that should go over there.

, and the game rules can be found here