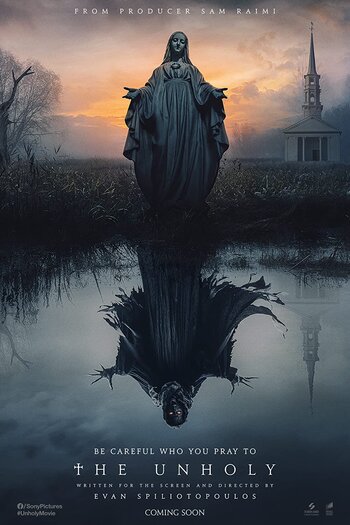 Be careful who you pray to...
Advertisement:

The Unholy is a 2021 supernatural horror film based on the 1983 novel Shrine by James Herbert. It was the directorial debut of Evan Spiliotopoulos, who also wrote and produced the film alongside Sam Raimi. It stars Jeffrey Dean Morgan, Katie Aselton, William Sadler, Diogo Morgado, Cricket Brown, and Cary Elwes.

The film follows the small town of Banfield, Massachusetts, where a journalist named Gerry Fenn (Morgan) finds a young woman named Alice Pagett (Brown) who, despite being deaf and mute all her life, suddenly can hear and speak, and claims to be able to see and hear the Virgin Mary. She goes around performing miracles, but suspicions begin to be raised when dark histories are uncovered regarding the town.

Tropes presented in the film: