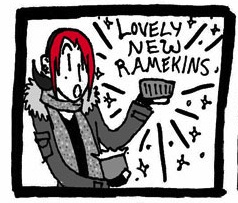 Imminent Moose was a Journal Comic written by Kyle Travers.

The series chronicled the life of the author through his day-to-day existence as a college student in Burlington, VT. Earlier strips focused on everyday dorm life but then shifted into focusing on apartment living and working retail. The comic was mostly self-reflective and often centered on the author’s life experiences and observations on life with sporadic appearances by friends and roommates.

Occasionally the strips took a more surreal turn in chronicling the struggles of Squid Fairy, a winged squid that grants wishes…pertaining to squids, as well as a short story about a snail’s dreams of flight and a trip into the refrigerator.

Updated weekly, but was occasionally subject to Schedule Slip.

The comic went on hiatus in September 2013, but as of April/May 2014 started up again. The newer strips were focused around Kyle's graduation from college, his thoughts about that, and his continued adventures in retail.

but is incomplete. No archive has been located and the webcomic is considered lost.