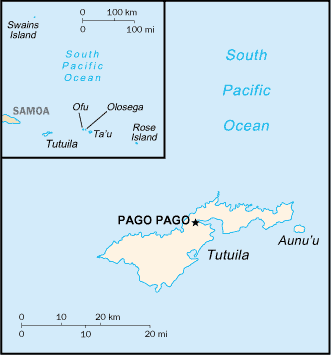 Not to be confused with the independent country of Samoa farther west (though they share a common language and historical culture), American Samoa (Samoan: Amerika Sāmoa) is an unincorporated territory of the United States in Polynesia, and is the southernmost territory of the United States and the only inhabited US territory south of the Equator. Most American Samoans are bilingual and can speak English and Samoan, which is also spoken by the country of Samoa, fluently. However, unlike the other territories of the US, American Samoans are not granted US citizenship at birth (unless they have a citizen parent); they are instead classified as US nationals. They have different passports and must apply for naturalization, but can work and reside anywhere in the US without restriction.
Advertisement:

The territory is known for having the highest rate of military enlistment of any US state or territory, with the local US Army recruiting station in Pago Pago being ranked first in production out of the 885 Army recruiting stations and centers under the United States Army Recruiting Command, which includes the 50 states, the District of Columbia, Puerto Rico, Guam, Europe, the Commonwealth of Northern Mariana Islands, the Federated States of Micronesia, Palau, the Republic of the Marshall Islands, Korea and Japan in September 9th, 2014. Unfortunately, that also means that American Samoa has a disproportionate number of casualties per population compared to other parts of the United States. The territory also has a large number of NFL players, with American Samoans being 40 to 56 times more likely to play in the NFL than a non-Samoan American and more than 200 American Samoans playing NCAA Division I college football, giving American Samoa the nickname of the "Football Islands".

On an unrelated note, American Samoa is the only inhabited place in the United States that lacks a Subway restaurant—even the Northern Mariana Islands has three on the main island of Saipan. 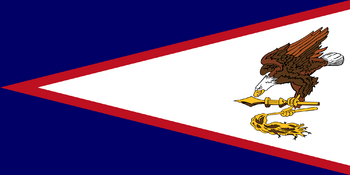 The flag consists of a red-edged white triangle pointing towards the hoist and dark blue upper and lower triangles, representing the colors traditionally utilized by both the United States and Samoa, charged with a bald eagle representing the US clutching a Samoan uatogi (a war club, epitomizing the government's power) and a fue (a fly-whisk, representing the wisdom of traditional Samoan leaders), alluding to America's guardianship over American Samoa as well as evoking the Great Seal of the United States.
Advertisement:
Miscellaneous