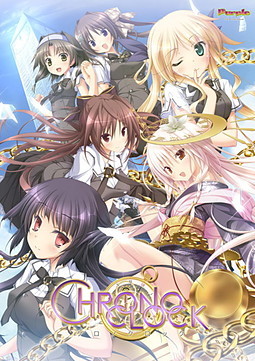 Rei Sawatari is an Ordinary High-School Student who is next in line to inherit his family's wealthy company. One day, he's been given a pocket watch which was passed down from his late grandfather, but little did he knew that the pocket watch contained a secret. While fiddling with the watch on his way to school, Rei realizes that he's about to get ran over by a truck, but then he suddenly finds himself back at his house unscathed and completely dumbfounded. He was certain that he should've died, that is until he meets Chronos, the self-proclaimed goddess of time. She explains that the pocket watch Rei is holding has the ability to rewind time five minutes back into the past when shattered, which was what saved his life from certain death. After realizing how fragile his life really was, Rei decides to become more proactive and uses the pocket watch to pursue one goal: to find a girlfriend and live his life the way he wants to.

Chrono Clock is a Visual Novel developed and released in Japan by Purple Software on April 24, 2015, and later released worldwide by Sekai Project on Febuary 28, 2017 after a successful Kickstarter campaign. The visual novel is primarly a romantic comedy focusing on Rei's attempts to get a girlfriend while using the time travel capabilities of his pocket watch to his advantage. The time travel aspect is simple and only a minor element in the story, so it isn't as deep and complex a la Steins;Gate. The H-scenes are not incorporated into the routes of the characters like most visual novels, but instead, are unlocked as bonus after-stories after each of the characters' routes have been completed. These after-stories were removed from the Steam version however for obvious reasons.

Not to be confused with Chrono Cross or Chrono Crusade.