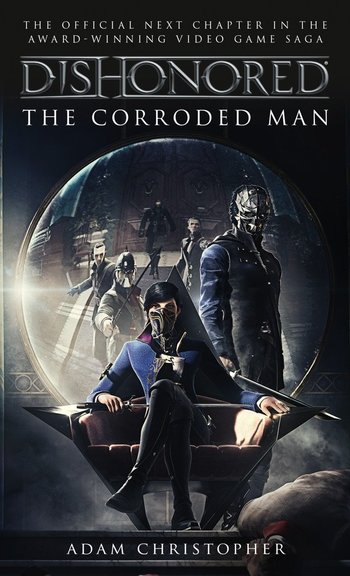 Dishonored: The Corroded Man is an interquel Expanded Universe novel of the Dishonored Series, written by Adam Christopher. It takes place between the events of Dishonored and Dishonored 2.

Empress Emily Kaldwin leads a dual life, fulfilling her duties as empress while training with her father, Corvo Attano, mastering the arts of stealth, combat, and assassination. A strange, shrouded figure appears in Dunwall, seeming to possess powers once wielded by the assassin known as Daud. Faced with the possibility that their deadliest foe has returned, Emily and Corvo plunge headlong into a life-and-death race against time. If they fail to learn the truth about this mysterious enemy, the result would be destruction on an unimaginable scale.

It takes place fifteen years after the events of the original game and is followed by Dishonored The Return Of Daud.