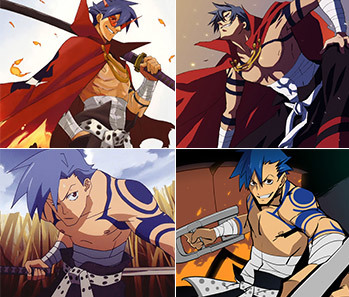 "Don't tell me I need a shirt for fighting giant robots, just who the hell do you think I am!?"
"Doesn't he own a shirt?!"
— Edward (about Jacob), Twilight
Advertisement:

If the cast of your favorite show happens to include an attractive male, the chances are high that he's going to wind up losing his shirt note probably not in a gambling parlor sooner or later. It may be gratuitous, or caused by the antagonist, and it will almost certainly bring the Squee, but it will also be temporary. Eventually, Mr. Fanservice will replace his shirt, and you'll have to resort to rewinds and freeze-frames if you haven't gotten your fill.

Unless, of course, the object of your Perverse Sexual Lust is this guy.

The typical Walking Shirtless Scene is the dude whose default attire involves parading around half-naked. His Limited Wardrobe is so limited, that it doesn't even include a shirt—or if it does, he seems to be totally incapable of keeping it shut (in a sort of Spear Counterpart to Navel-Deep Neckline). And even if he does have an Unlimited Wardrobe, every outfit would have the singularly shared trait of lacking anything that covers his upper torso. Alternatively, a variant exists where the dude does wear a shirt, though he removes or loses it a lot to evoke the same amount of eye candy as one who forgoes any upper torso covering.

As you might guess, fangirls love him. And sometimes guys, as well.

Super-Trope to No Shirt, Long Jacket. Sub-Trope of Stripperiffic. For non-Fanservice-y examples of shirtless Funny Animals/Civilized Animals, see Half-Dressed Cartoon Animal. Male Half-Human Hybrid creatures often also apply, such as centaurs or mermen (in the latter case the trope name may be a misnomer as merfolk can't exactly walk.)

For obvious reasons, this is a practically male-exclusive form of Stripperiffic-ness. Normally, the closest you can hope from someone without a Y chromosome is some Navel-Deep Neckline, Godiva Hair or a Walking Swimsuit Scene. Exceptions to this rule are very rare, and require some rather impressive design gymnastics to implement. Or are in works intended for more mature audiences in the first place, or those from cultures where female breasts aren't seen as inherently sexual.

What Guys Should Wear

When interviewing Ryan Lochte, who's bare-chested during this segment, Renee Bargh says that this is her idea of a well-dressed man.

What Guys Should Wear

When interviewing Ryan Lochte, who's bare-chested during this segment, Renee Bargh says that this is her idea of a well-dressed man.